The US CRO market is predicted to have a healthy future, with the greatest potential for growth in the preclinical sector, according to a report by Frost & Sullivan.

In areas such as toxicology studies outsourcing penetration is low, according to the report, which presents an opportunity for companies willing to invest in the sector.

The report says an increase in capital expenditure will be necessary to build or acquire the facilities needed to enter the preclinical toxicology market.

Despite this the report notes that several contract research organisations (CRO) have been making investments in their early stage capacity.

Biotechs are predicted to be the strongest driver of growth, followed by specialty pharmaceuticals and niche and startup small molecule companies.

Although the report predicts a bright future for the US CRO industry it also highlights necessary adaptations if companies are to prosper in an increasingly competitive and fragmented market.

It also forecasts that these factors will result in lower margins for contracts and consequently companies may find it difficult to translate a strong backlog into revenues.

In addition, the global nature of many CROs means that companies will need to work closer with IT vendors to ensure their systems are suitable for the changing market.

Consequently the report predicts that CROs will play an increasing role in choosing IT systems and platforms, with the power to make decisions shifting away from sponsors.

On Wednesday last week, militants armed with machine guns and hand grenades took control of multiple locations across the city, including several hotels and restaurants. Although full details are yet to emerge, it is widely reported that up to 172 people lost their lives.

Speaking with India’s Business Standard, Shetty said that, in addition to the obvious human tragedy, there may be considerable damage to the country’s reputation as a place for international firms to do business.

He suggested that: “The drug industry could see short-term setbacks, especially in the field of outsourcing,’’ adding that ”executives of global companies may be asked to refrain from coming to India and many planned visits have been cancelled.’’

The Indian outsourcing market, which has over 80 US Food and Drug Administration (FDA) approved facilities, was worth $1.27bn last year and, prior to the attacks, was expected to generate revenue of $3.33bn by 2010.

While it is too early to say if international drugmakers will turn to the country’s main outsourcing rival China long-term following the attacks, for 2008 at least Indian firms have lost out on contracts that would otherwise have been won at the shelved tradeshows.

Furthermore, although the main impetus for outsourcing is the reduction of costs, supply chain stability is also a major factor in the selection of outsourcing partners. As a result, long-term political strife and social unrest may be enough to tip the scales in favour of a contractor operating in a country where such concerns are not a factor.

Meanwhile, the European Union and China are also looking at working more closely in the future.

The US Food and Drug Administration has opened offices in three Chinese cities – Beijing, Shanghai and Guangzhou – to help improve the safety of medicines and ingredients imported into the US.

The FDA’s main office will be in Beijing, with the Shanghai and Guangzhou locations serving as inspection stations. This is part of a major plan by the agency to expand its international presence, with additional branches due to open in Europe, Latin America and India before the end of the year.

“By having a presence in other parts of the world, we can work more closely with manufacturers and other governments, better share best practices and further ensure that quality and safety are built into … products at the point of manufacture.”

The opening of the new offices is timely, coming at the tail end of a series of scandals involving Chinese products in the US and other world markets, including contaminated medicines, foods, and personal care products such as toothpaste. China is also at the top of the list of countries for products which have had import permission to the US refused.

With a headcount of just eight, plus five Chinese nationals, the FDA’s presence in China is considered mainly advisory, providing advice on US quality standards and training local inspectors, although it will also maintain an inspection function.

The FDA has been under fire from US politicians in recent weeks, with questions raised about the agency’s oversight of the pharmaceutical supply chain in the wake of the heparin scandal, which saw product from around the world recalled after contaminated heparin sourced from China found its way into medicines, the ongoing probe into quality standards at India’s Ranbaxy and slew of food safety incidents.

One of the persistent criticisms is that the agency should do more inspections of overseas plants. The FDA carried out 13 visits to Chinese production facilities, out of more than 700 sites in 2007. That compared with 24 to France, which has 162 drug manufacturing plants.

Enough is enough: Mumbai to politicians 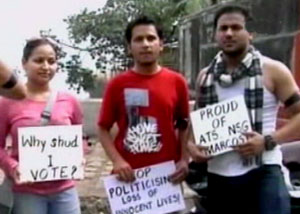 After the Mumbai carnage, angry voices are now heard on the street, on the web and in phone inbox. And they are saying only one thing — enough is enough.

In one such campaign, text messages by anonymous senders drew crowds on the streets at Colaba. Citizens gathered after an SMS did the rounds to protest against politicians who did nothing to stop the terror attacks.

The SMS said, “The politicians and administration are equally to be blamed. They only want our votes. If they can’t protect me and secure the country then I want all of them out.”

The carnage in South Mumbai has ended but it has started a a citizens’ movement — a movement which is gathering momentum on the Internet and via mobile text messages.

Lashing out at politicians, one sender said, “For the first time in my life, I am not proud to be an Indian.”

And on popular social networking site Facebook, home truths that hurt. Four days after the carnage began, the protest had spread.

Protesters took out a candlelight march from Marine Drive via the Trident and finally to the Taj. They were shocked at the brutal terror attacks and their grief turned into anger; anger directed at our politicians.

“Initially, I saw journalists ducking when the shots were fired. Then by the third day got used to it,” said actress Juhi Chawla.

After the attacks, the people of Mumbai are demanding accountability and will settle for no less.

US President-elect Barack Obama on Monday said Americans stand with the people of India “in this dark time” after the Mumbai attacks and asserted that his incoming administration was “absolutely committed to eliminating the threat of terrorism”.

“In the world we seek, there’s no place for those who kill innocent civilians to advance hateful extremism,” he said at a press conference to name the new members in his cabinet, including Hillary Clinton as the Secretary of State.

“As we learned so painfully on 9/11, terror cannot be contained by borders, nor safety provided by oceans alone… Last week, we were reminded of this threat once again when terrorists took the lives of six Americans among nearly 200 victims in Mumbai,” Obama said.

The first African-American President of the US, who will take charge on January 20 next year, noted that he had called Prime Minister Manmohan Singh this weekend.

“I told Prime Minister Singh that Americans stand with the people of India in this dark time. And I am confident that India’s great democracy is more resilient than killers who would tear it down,” he added.

America’s national security challenges are as grave and urgent as that of the economic crisis, he said and maintained that his incoming administration was “absolutely committed to eliminating the threat of terrorism.”

“We are fighting two wars. Old conflicts remain unresolved, and newly assertive powers have put strains on the international system. The spread of nuclear weapons raises the peril that the world’s deadliest technology could fall into dangerous hands. Our dependence on foreign oil empowers authoritarian governments and endangers our planet,” he said.