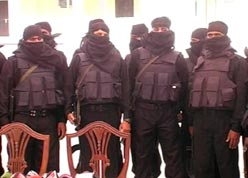 A chief of a Indian Navy commando unit flushing out terrorists at Mumbai’s Taj Hotel said on Friday that he saw 12 to 15 bodies in one room.

“We found 12-15 bodies,” the commander, whose face was disguised in a black scarf and sunglasses, told a news conference. The commandos found money, ammunition and an identity card from Mauritius thought to have belonged to the terrorists.

Addressing the media at the Western Naval Headquarters, INS Angre, the Marine Commandos (Marcos) said that there were two teams of commandos, one of which was sent to the Taj while other engaged the terrorists at the Oberoi.